Photographed the building in which phenomenon Turkish Tv Show ‘Bizimkiler’ were filmed in first time, Kürşat Çetin went to almost 60 movies, 20 TV Shows and clips since 2009. Sharing this pictures form his Twitter account ‘nerede çekildi’ (where they were filmed), Çetin says that İstanbul is a filming location and open plateau. Saying that tracks which belongs to a movie can be found in every neighbourhood and every street, Çetin says “They call me Yeşilçam (Golden Era of Turkish Cinema) sleuth because I am in pursuit of these tracks.”

Among the shooting locations Çetin went, there many cult movies from Yeşilçam. Mansions where Tosun Paşa, Süt Kardeşler, Şabanoğlu Şaban, Gülen Gözler were filmed and streets where Kapıcılar Kralı and Çöpçüler Kralı were filmed…

Saying that it is very exciting although the sharings comes as a result of hard work, Çetin express how he feels when he go to the locations: “ Back to the Future is my favourite movie and I would like to see its filming locations one day. In this movie, there was a time machine named as DeLorean. When I go to the filming location, I feel as if I went to those moment when the movie was filmed. A kind of time travelling, I travel through past. In a moment I get away from that moment, isolate in now and live the past.”

“Outdoor shooting place I saw while watching the movie tells me mostly where it is. Structure of the street, structure of the houses, slopes are the clues for me. After narrowing the target and being ensured, I search that place on the internet or by going there, and I reach my goal” says Çetin and underlines the effect of being citizen while locating the places.

Saying that goal behind finding and photographing the locations is only to share, Çetin says “When I started to share pictures, I received positive feedbacks from famous and other people. This actually encouraged me little bit more. From now on my only wish is to reach larger masses.”

What Was the Condition of Socially Prominent People?

Before Çetin started the tradition of going to shooting locations, he was known as the guy who visits graves of famous people. Firstly visiting Barış Manço’s grave, Çetin visited Ömer Syfettin, Sadri Alışık and Ayhan Işık’ graves on the same day. Çetin tells the importance of cemetery visits: “Curiosity… What was the condition of grave of these people who are loved by masses? Plain, fancy or well-kept? Since I was visiting, I decided to take pictures to immortalize those moments.” 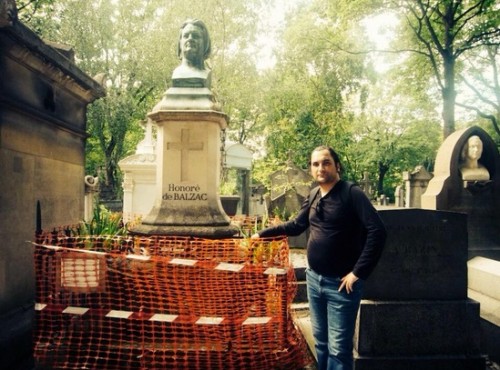