Works on Yenikapi Shipwrecks, which are the most comprehensive nautical archeology project held in Istanbul, continue without cease. Dated to the middle ages, world’s biggest shipwreck mass had been unearthed in the archeological excavations sustained by Turkish scientists between the years of 2005-2013. Istanbul University Yenikapi Shipwrecks Project Coordinator Prof. Ufuk Kocabas states that they have been concentrating on the examination of the shipwrecks in the laboratory and their preservation for the last four years after diggings finished. The project crew has recently held the opening of the “Door Opening to the Past: Yenikapi Shipwrecks” exhibition in the IU Rectorate Exhibition Area.

Shipwrecks Anchor to the İU

Stating that they chose 20 shots totally including illustrations in the project’s fourth photograph exhibition, Prof. Kocabaş emphasizes that ships have anchored for the first time to the Istanbul University, the real owner of the project, thus they are considerably proud of it as a crew. Prof Dr. Kocabas reported that the activities would carry on and in the next step they would display YK12 ship, the symbol of Yenikapi Shipwrecks and whose replica was completed. Prof. Kocabaş pointed out that their ultimate goal is to establish a museum where they could be able to exhibit all the pieces that were restored and the preservation works were completed, moreover both Istanbul Metropolitan Municipality and Minister of Culture had already a current museum project and they’d been waiting impatiently the project to be realized. 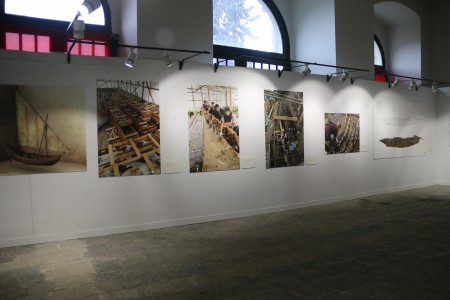 ‘Dimitriadis Efendi’ Touch to the Exhibition

Prof. Dr. Kocabaş said that one of the outstanding images of the exhibition is “lenticular” image which reflects both Yenikapı in Byzantine period and during the archaeological excavation. Prof. Dr. Kocabaş expresses that the workers who work in the excavation can be seen in a specific angle in the image which is made with 3D technique.

Another outstanding frame’s original one is still in İstanbul Archeological Museum Library and is a painting drawn by Engineer MSC Dimitriadis Efendi in 1873. This work of art is a drawing of 28 meters İstanbul’s ancient wall said Prof. Dr. Kocabaş. Prof. Dr. Kocabaş also said “This work of art which is a watercolor paint is made with the permission of Manager of İstanbul Archeological Museum Zeynep Kızıltan.” 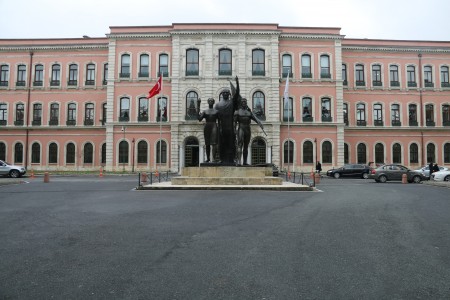 This Success Belongs to İstanbul University

Saying that ‘YK12’ who gets the title “the first wrecked ship whose construction is completed in our university and country” is represented with two illustrations, Prof. Dr. Kocabaş states that this wrecked ship is one of the most beautiful examples of “karma” technique.

Prof. Dr. Kocabaş said “’Galea’ type ship which was used in Byzantine navy is used in photo-mosaic and drawing techniques for the first time” and stated that photos from the excavation area are also take part in the exhibition.

Saying that İÜ experts and students have lots of contributions about Theodosius Harbor and Yenikapı excavations which are the most important archeological discoveries lately, Prof. Dr. Kocabaş expresses that this is a huge success for our university.