Founder and publishing manager of leading newspaper of Armenian community in Turkey, Hrant Dink memorialized by his lovers at the 8. Anniversary of his death.

Marching from Taksim Square to the point of Dink’s murder, crowd carried placards in Turkish, Armenian and Kurdish. Chanting citizens came across to intense safety measures of police. Closing the entrance to Taksim Square with barriers and riot control vehicles, police maximized safety measures with special teams and riot squad since the morning. 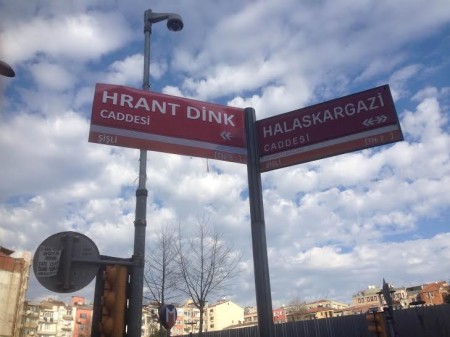 According to BİANET, poster with “Confront! With Hrant, With Genoicide” slogan and Dink’s photo was hanged on the wall of building of Agos Newspaper. Red cloves, candles and pomegranates were laid down in front of the building.

According to reporters of Ajans Universite in the field, Ozan Özen and Efe Altay; thousands of people marched from Taksim Square to Agos newspaper. Many members of the parliament and NGO representatives also joined to the march. 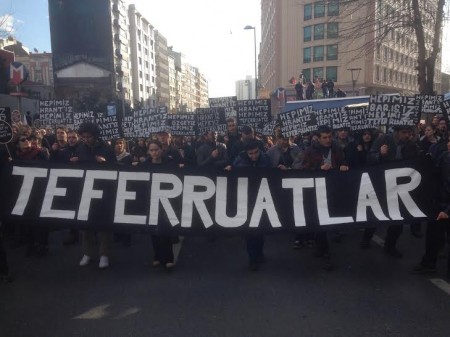 Chanting “Against Fascism, You’re My Brother Hrant!” and “We are all Hrant, We are all Armenian”, citizens filled the streets. Writer Murathan Mungan read the statement from balcony of the newspaper building in Şişli. After the statement, Hrant Dink’s wife, parents of Berkin Elvan; Gülsüm and Sami Elvan saluted the crowd from the balcony.