Zeynep Çamcı was born in Muğla on December 11, she is graduated from İstanbul University from the Faculty of Communication. In the film Recep İvedik 2 of the director Togan Gökbakar, she had a short role then she acted two season on the series Leyla ile Mecnun. Then after, she acted on the series “Beni Böyle Sev” on the leading role with Alper Saldıran. Finally we had a joyous reportage with Zeynep Çamcı who had a best female actor award on Antalya Golden Orange International Film Festival.

How was your university years? Do you have memories which you did not forget?

My school years were superb and amusing. I did not forget the first day of my school life, my first film, the short movies which we shot, my friends, my teachers and the festivals which we meet. 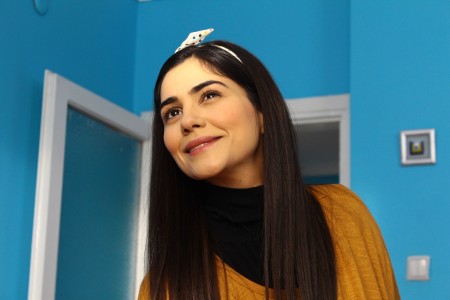 Did you always want to be an actor or did you want to go this way when you started to study this department?

I always want to be an actor but I didnt’t try it at the first years of my school. Then my friend Leona shot a short movie and gave me a role. Our teacher and director Oğuzhan Tercan encouraged me to be an actor. After short films and episode acting my actor adventure started.

“I had a road in my mind, The first step was acting

How was it to act at the phenomenon series “Leyla ile Mecnun” with Onur Ünlü, Ali Atay, Ahmet Mümtaz Taylan and other actors?

It was superb to act at this series. We had funny moments with the team. Love and respect to the Leyla ile Mecnun team.

You had subordinate roles on the series “Leyla ile Mecnun” and “Emir’in Yolu” Then you had a leading role on the row “Beni Böyle Sev” How was your work on set?

The team of “Beni Böyle Sev” was a team where I was happy. The set works are good, I am busy but we are shooting new sections.

Did you have difficult scenes on the film “Meryem” ?

Yes, I had scenes where I thought that they could be difficult but the director Atalay Taşdiken and the whole team believed and supported me.

Did you have characters in your filmography which have fascinated yourself?

I can tell you that all charecters which I acted have fascinated myself. Zeynep is my first child, I liked Sedef, Can educated me, Ayşem groved me and Meryem influenced me.