Rock music listeners from Bursa founded Rock City Culture Club to revive rock culture which was popular in the city in 1990’s and make Bursa regain its title of “Rock City”.

Although it seems that the effect of rock music is diminished in Bursa, there was an alive rock culture in the city in the past. Its name was identified with rock music so much so that Bursa was even called “Rock City”. Rock History of Turkey writer Güven Erkin Erkal says that the first rock festival in the city was arranged in 1986 by Güven Erkin Erkal with an important support from İlhan İrem. In the festival, Pentagram and Mirage vocalized by Teoman took the stage. After this festival, firstly with Whiskey and Devil concert then Akbaba concert, Bursa became an important place of rock festivals and concerts. Many popular band were giving concerts and joining festivals in Bursa. Organizer of these concerts in the city was generally Sedat Yıldırım Sarıcı.

But when the youth in high schools and university starts to graduate, rock bands were split apart. Sedat Yıldırım Sarıcı went abroad. Others could not supply the unity and organizations which would protect the city’s title of “Rock City”. Diminishing rock culture, was so harsh in the city that it was hard to find even a good rock bar in Bursa.

A Gift From Bursa to Rock Music: Şebnem Ferah

Bursa raised many groups and artists in the rock field. Most recognized one is Şebnem Ferah. When it comes to woman vocal in Turkey, aforesaid first name is Şebnem Ferah who acquired fame with her all-female band Volvox while in Bursa. Adventure of Volvox started in 1988 and finished in 1994. In the band Özlem Tekin played the keyboard for two years. Rest of the stories of Şebnem Ferah and Özlem Tekin is as we all know…

There are also bands performing both local and across Turkey in the city although their names are not known very much. Suspect, Assasination, Catastrophe, Deli, Bohem, Death Project, Volvox, Vital, Virüs, Eternal Dismay, Eksi6, DenDen ve Katl-i Vacib are some of the bands from Bursa. 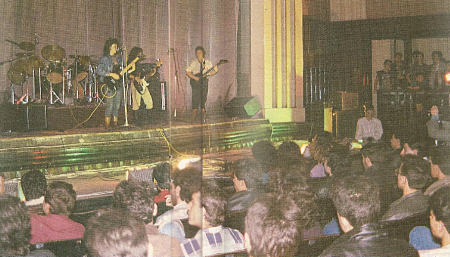 Volvox on the stage…

Rock Culture To Rule Over The City Again

I have been trying to make music for years in Bursa. But I found neither a musician compatible with my style nor a place to play. I hardly put together lately. But I realized that İt was not only me going through this gripe. Reason is that people see rock and metal music “no money-winning” and “unpopular style” anymore and tend towards popular music genres. But I realized many musicians like me who does not give up but shot to pieces.

First there was an idea of community in my mind to gather these people under a roof and then I had created Facebook group. But as you know since there are many groups like this on Facebook, I thought people would not take seriously. While I was thinking about how to improve, idea of club came to my mind. I thought people would take more seriously and be interested when I offer them the project frigidly and it happened so.

What are your goals as a club?

Our goal is to unite musicians and listeners who embraced rock and metal based music genres, under a roof. We want to organize concert, event, organization, culture events, workshops, seminars, find members for their bands or help people who wants to join a band and make musician candidates who could not find a chance, experience the stage; especially revive old “Rock City” soul and keep old-new generation together. Because as you know music is endless and we have lot to learn from each other. I believed that my project will be beneficial to this.

Teoman with his band Mirage appealed to music lovers in Bursa.

Could you tell about rock heritage and history in Bursa?

At the end of 1980’s and 90’s especially- I do not remember because of my age, as my elder brothers tell- I heard that first people who grow their hair were from Bursa. Even I heard that they suffered because of prejudgements. Many festivals were organized and bands gave concerts mostly in Bursa. So Bursa had gained title of Rock City. In turkey people who is over 30 and set their hearts on this music, directly think of Bursa when it is said “Rock City”. Right now there is an amazing crowd but it is split apart. Although old “Rock City” crew says “we are done”, they also wait for spark. As I sais our biggest goal is to revive Rock City soul.

Why was Bursa memorized as ‘Rock City’?

In those times in Turkey, Rock and metal listeners were mostly in Bursa. Rock and Metal music was owned as much as it was active. And substantially there were many metal and rock based places in Bursa such as bar, café. In this way it spread like branches of tree. As people hang out in those places, they socialized and many concerts were done in this way. People who play instruments united, new bands came out, as the new band came out, new projects and many organizations came out. In Turkey, there are still famous musicians from Bursa.

If we look at Turkey in general we can easily say that there is a wrong perception of rock-metal listeners. Is there a similar perception from public in Bursa?

As it is everywhere, there is in Bursa of course. Popular music culture blockades people and people who listen the music genre we listen is minority. It is same since 1980’s… Till this day we have been exposed to many adjectives like satanist, atheist. But we know ourselves so we set eyes on our music; go on in our way.

Do you have efforts to encourage young generation rock group from Bursa! Or will you?

Do you believe in capacity of Bursa to produce rock-metal music?

Absolutely. At the end, we are talking about city remembered as “Rock City”. Yes right now it is not the same but with our efforts it will revive from its ashes. The biggest problem in Bursa is lack of space; present places think too financial and lack of sponsorship. We try our best. But we need support. In this subject I believe that place owners in Bursa will show an interest. Because this club belongs to all of us. Also Bursa Rock City Club siblings with İzmir Ege Rock Club. 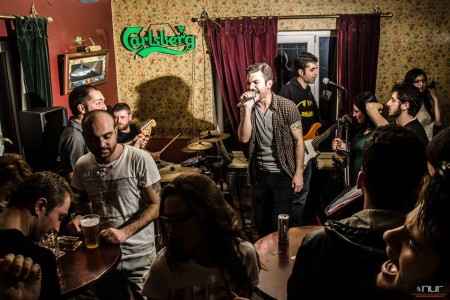 DenDen is a band from Bursa. They continues their works…