The meeting of the Security Council on the “Responsibility to Protect” went on the second day with the subject of ‘’Situation in Syria”. Event which was organized by Istanbul University (İÜ) Faculty of Law and Freie Universität Berlin the event was Model United Nations (MUN) programme held in Rabi Madrasah. The event was also organized as a part of the “4th International Crime & Punishment Film Festival.

“Students Learn to Think from Different Views”
Model UN Director from Freie Universität Berlin, Peggy Wittke said that simulations can be an efficient part of the educational system and have a lot of profits for students. Wittke, “They gain inside knowledge into the working of an international body; like the Security Council, they get into the topic of course, they experience the perspective of a different country, they get to know each other which is especially very delightful for me to see, I have four students from my university and the rest is from Istanbul University and it is really delightful to see how well they all cooperate.”

Wittke continued: “I think it is really important to have different views on a problem because there are many sides and if people are able to stand in somebody else’s shoes, even for just a short of period of time, maybe we can solve some conflicts better. We believe in interdisciplinarity to involve as many faculties as possible. We are based in the Faculty of Law but we invite students from every faculties, so we have law students, political science, economics but we also have physics or medicine or architecture because there are so many interesting topics all faculties can find interesting questions.” She also said that she was very happy when she had been invited to İstanbul and stated that this conference was a significant experience for her and her students.
Student at Istanbul University Faculty of Law Ege Akyüz, said that 18 country in United Nations Security Council which are represented by mosty Istanbul University students sought for common solutions and results.

Model United Nations (MUN)
Model European Union/ Model United Nations (MEU/MUN) are authetic simulations of the European Union and the United Nations. These simulations are interactive and interdisciplinary teaching methods, where the complex structures and areas of operations are represented in a unique way. The participants actively participate in the decision-making process by representing a member state in an organization body, such as the European Council or the United Nations’s Security Council. In this manner, they gain experience as, diplomats’s and other political actors, obtain knowledge of the history, functioning and working areas of these multilateral organizations, and become aware of different negotiation strategies and conflict solving mechanism (learning by doing). The Freie Universität Berlin has been organizing Model United Nations events in Berlin since 1998, in a part in cooperation with the Auswärtige Amt (Federal Foreign Office) and the United Nations Association of Germany). 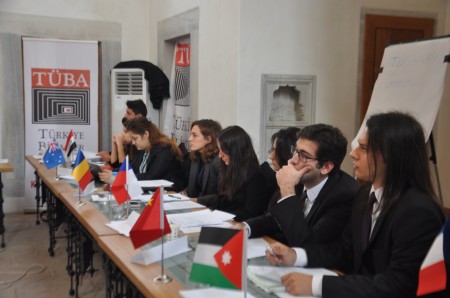