English painter Ned Pamhilon started his Atatürk Painting at 09.05 and after sleepless 24 hours, he completed at 09.04 on November 10th. Pamphilon answered questions from Ajans Unıversıte before starting.

After completing his education of architecture Pamphilon started to admire art of painting. Travelling the world with his band, Pamhilon came to Turkey for the first time with his band. But he left Turkey, with his words, “thinking I’d never come back ever again.” Pamhilon changed his idea after a small tour with a little wooden fishing boat on Bosphorus with his friend. Saying that “I realized there was Europe and there was Asia and there is incredible waterway… By this time, I was painting, making artwork.”, Pamphilon asserts that he decided to promote Turkey and Atatürk about this time.

Could you tell us about your story of starting to paint?

I came to Turkey in 1988 for the first time. I was singing in a band and we were playing in various venues through Europe and Turkey. I did not have the most positive experience in 1988. We were some guys in a van and it was a little bit difficult. Turkey was the last country that we came. And I left Turkey thinking I’d never come back here ever again. And then my best friend was living in Baltalimanı, right on the Bosphorus. He told me “Ned you must come to Turkey again. I am your best friend and you must come.” He had little wooden fishing boat and we went out on Bosphorus. And it was life-changing moment. I realized there was Europe and there was Asia and there is this incredible waterway… By this time, I was painting, making artwork. And then I realized in mid-nineties not much of the people in England knew about Turkey. I have been to Kuala Lumpur before that and I had successful time there but there was something more magical about Turkey maybe because it is where east and west meet. And it seems so chaotic and I started to realize this culture, this city. I did my education with a degree in architecture but I was not much taught about Ottomans or Turkey. I never heard of Atatürk. And then I thought I am going to paint Turkey and promote to rest of the world because they were not doing it.

You gave up architecture, what would you do if you were not a painter?

I would play football for Arsenal. 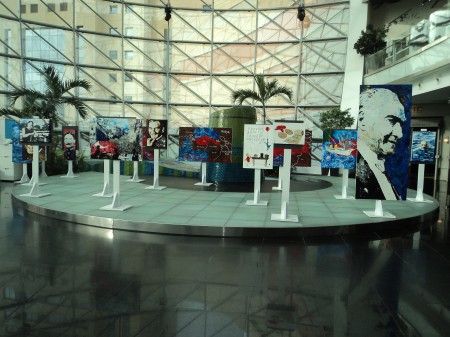 How did your admiration for Atatürk started?

How did I know him? Because he was everywhere… Paintings, pictures. portraits were everywhere. And I thought I was a little bit uncomfortable with that like something is being pushed into your face… because he has paintings everywhere but you did not see the smiling Atatürk very much. It was rare, he was usually quite serious. So I decided to paint a smiling Atatürk. Also some said:” You are English you cannot paint our Atatürk”. I said “since you told me I cannot, I will.” Really, as the time went by, I was asked to paint another portrait and

another. It was really I, people who came to me asked. I said okay. I think painting smiling Atatürk was different at least it was perceived as different. Generally Ataturk portraits are same.

Because Atatürk did not sleep during the war in one of the battles in Afyon. So I am going paint the silhouette of Atatürk at Afyon. They said “Wouldn’t be fun if you did not sleep 24 hours for the recognition of this.” I said “Okay we could do that.” We thought doing in a shopping centre might be attractive way.

Do you have new projects?

This exhibition “Her Yer Mustafa Her Yer Kemal” is really the starting point of the new brand “İstanbul 1881”. Aim of “İstanbul 1881” to create images promoting Turkey and at the same time 1881 is the birth year of Atatürk. So we are promoting the scenes in Turkey ad it is also reference to founder of the Republic, Ataürk. We are planning to open a store. We plan to open in İzmir. Its name will be ‘İzmir 1881’. If we go to Diyarbakır, it will be Diyarbakır 1881. That’s our plan. 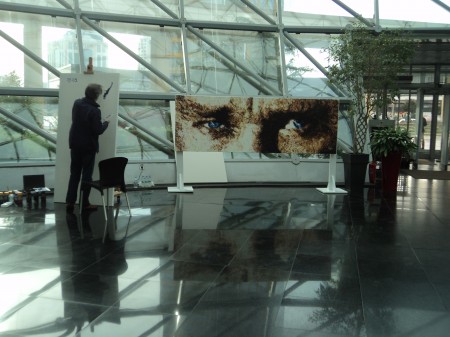