Social Responsibility Award of the festival was presented to Festival Academy Team for their movie “Uzun İnce Bir Yoldayım”.

52nd Antalya Movie Festival held between 29th November- 6th December this year, ended with the ceremony in which “Golden Orange” awards were presented. In the festival that bring together professionals and passionates of the cinema, the newest movies of Turkey’s and world’s cinemas have been screened. At awards night held in Cam Piramit Fair and Congress Center, with the presenter as Oktay Kaynarca, Golden Oranges have found their owners.

The Social Responsibility Award of festival was given to the movie “Uzun İnce Bir Yoldayım” that is the co-production of the teams of Istanbul and Akdeniz Universities. IU Assistant to Rector and Head of Press and Public Relations Prof. Dr. Ergün Yolcu, student Hilal İpekçi on behalf of students, academics and students of Antalya Special Education And Rehab Center, took the award from Festival Director Elif Dağdeviren.
Meaningful Project From IU Faculty Of Communication

Academics and students of Istanbul and Akdeniz Universities took place in festival with “Festival Academy” in this year. Festival Academy which also represents the section of social responsibilty of International Antalya Movie Festival, carried out a project centered as Antalya Special Education And Rehab Center which educates the children impaired as hearing, speaking, mental, physical or have autistic disorders and prepares them into life.
Project team shooted 20 minute’s short movie named “Uzun İnce Bir Yoldayım” as being ispired from Antalya Special Education And Rehab Center within “Festival Academy”. Movie’s İstanbul University team with the General Coordinator as IU Assistant to Rector and Head of Press and Public Relations Prof. Dr. Ergün Yolcu, includes Faculty of Communication Assistant Prof. Dr. Ümit Sarı, Assistant Prof. Dr. Mesut Aytekin, Assistant Prof. Dr. Onur Akyol and students Yusuf Tekke, Fatih Çalışkan, Atıl Boğa, Ersin Sel, Hilal İpekçi. From Istanbul University Vocational School of Technical Sciences Electronic and Automation Department Radio and Technology Programme, Deputy President of Programme Associate Prof. Dr. Özgü Yolcu and first grade student Betül Günay also took place. Akdeniz University with the head of the team as the Dean of the Faculty of Communication Prof. Dr. Bilal Arık, also had Academic Doğacan Aktaş, Vedat Oyan, Sultan Koca, Necip Canan, Mehmet Kaşkır, Kazım Akgüneş and Mahmut Atılgan as their team members. Before the festival, academics and students periodically got together and visited Special Education School, shootings got done and the educationalists had conversations with the parents. The Festival Academy team that finished all the shootings and editings in two weeks created a movie that reflects the life, problems and the success of students who are in need of special education.

In the movie, Antalya Special Education And Rehab Center student, Şerife, met with piano for the first time in this school. With the encouragement from her teachers, she starts to play the piano and it leads her to feel herself much valued.

She has lost her father for a little while ago. She goes on going to school as she helps her mother in her flower greenhouse. Şerife and her friends shows everyone that when given a chance, many obstacles can be overcomed. 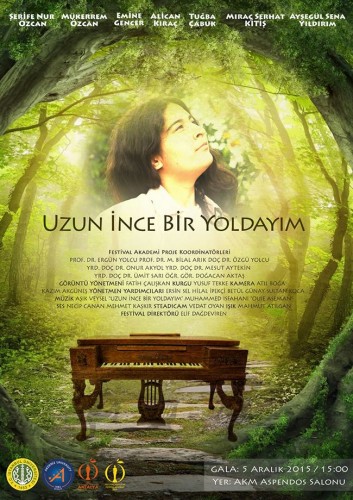 A Special Gala Was Held For The Movie

The short-movie that is made as a part of Festival Academy, “Uzun İnce Bir Yoldayım” , was presented to movielovers in Antalya AKM Aspendos Saloon with a special gala on December 5th 2015.

Being one of the social responsible projects of 2nd International Antalya Film Festival, “Uzun İnce Bir Yoldayım” had Mayor Menderes Türel’s wife Ebru Türel, and along with directors, actors, journalists and movielovers individuals that needs special requirement and their families attended.

The gala of the movie that Antalya Special Education And Rehab Center students starred in, was as colourful as the gala of movies that compete for Altın Portakal. As it is on the competetion movies, the gala that starts with the presentation of Elif Dağdeviren went on Ebru Türel’s short speech that presents the center. Following, the screening of “Uzun İnce Bir Yoldayım” occured. After the screening that ends with a great applause, Festival Academy Team, answered the questions of the audience. Deemed of the Festival’s Social Responsibility Award, “Uzun İnce Bir Yoldayım” gain a great attention from the media.

Festival Academy Team Met With the Sector
Festival Academy Team members, has followed the movie screenings as they were contuining to shooting the movie. Team members have also met with the directors, producers, screenwriters, cinematographers and other professionals that came to Antalya in the workshops and the interviews. In order to reflect International Antalya Film Festival’s energy and excitement to the youth and present the young attendees not only aa ‘audience’ but as ‘producers’, letting them meet with the sectors prominent figures to contribute to their education Festival Academy’s topic for this year was, “Taking a Fresh Look to Education.”