Academician from Galatasaray University Sociology Department Nazlı Ökten Gülsoy participated in the conference which took place at IU Faculty of Literature’s lecture hall 10. Having  many articles on Foucault, Bourdieu and post-structuralism, the academician gave a speech titled “Information of Oppression and Oppression of Information: Is it possible to read Bourdieu in conjunction with Foucault?”

Gülsoy, included philosophers such as Jean-Paul Sartre, Claude Levi-Strauss in her speech where she analyzed the government and oppression in Bourdieu’s context. She suggested that in the world order established after the Second World War, democratization in university education and diploma values lost importance.

Gülsoy pointed out the decrease in education qualities caused by the new universities in Turkey. She made remarks about the fact that thanks to private universities everybody could get higher education but that this also had some negative influences. She also examined the basic universal models of sociology’s historical development. 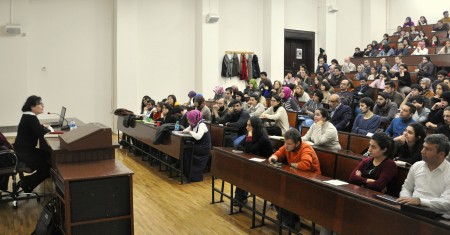