International Semiotics Conference took place in Istanbul University for the fifth time after four conferences abroad. Professor Marcus Solomon’s 90th anniversary was celebrated with the project, Semiotics of Cultural Heritage. The guest of honor, Professor Marcus gave a lecture titled “Cultural Heritage: Traps and Dramatic Choices”. After the conference, Prof. Marcus talked about his interest in semiotics, his perspective about the Turkish culture and evaluated the conference.

Prof. Solomon Marcus explained that the basic source of his interest in semiotics was his interest in languages and that he became more or less familiar with Romance languages with English and German and his native language Romanian. He talked about how he learned Russian enough to understand mathematics and linguistics published in Russian journals and books including translations from Western journals, less available to Romanians during the communist period. He stated:

“Turkish language remaineda mystery to a large extent for me . I was aware that a lot of Romanian words come from Turkish and I always learn such new words. Here in Istanbul I am looking around with great curiosity. My interest for Turkish language does not stop at the level of etymology. I want to understand its structure.”

As he paid attention to the regressive nature of syntactic constructions in Turkish (adverbs before adjectives, which come before nouns) in his 1967 Book “Algebraic Linguistics (Academic Press, New York) Prof. Marcus underlined that he pays much interest to the system of diacritics in Turkish language and that he tries to compare it with diacritics in other languages and he added “I try to understand how big is the gap between the way you pronounce a word and the way you write it.” 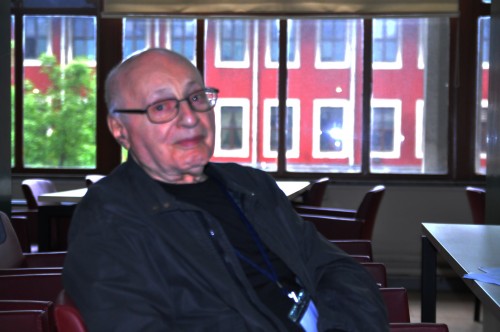 Prof. Marcus said that celebrating his 90th anniversary in Istanbul means a lot for him and added “My challenge was always to transgress borders of any kind: geographic, historical, cognitive, cultural, national, scientific and to reach the very kernel of human life and of today’s planetary situation, where opportunities and dangers are equally strong”.

Appreciating Istanbul University’s openness towards the diversity of the world today, Prof. Marcus explained that at this congress he met people from Europe, Asia, America and that he met new friends and equally his old friends. He underlined that semiotics is a transdisciplinary vehicle and explained:

“Under the umbrella of sign processes you can communicate with people whose background is different from yours. Turkish culture is a huge, impressive historical accomplishment, which deserves our attention. So, I am very proud to be celebrated at the Istanbul University. You should not separate my semiotic face from my mathematical face, my linguistic face, my computer-scientist face, my literary face, my philosophical face, they all form an organic unity and each of them is in strong interaction with the others”.

Talking about his lecture “Cultural Heritage: Traps and Dramatic Choices”, Prof. Marcus said that the challenge addressed by Professor Eero Tarasti proved to be well inspired. Prof. Marcus said “The key words of my lecture were ‘Trap’ and ‘Dramatic Choice’ and the reaction I have received confirmed my expectations. But I had much to learn from other lectures, especially from those concerned with non-European cultures. The problem is that each author is captured by some specific cultural monuments of the past and little room is left for selective, critical attitude, because it is clear that we cannot increase the cultural heritage without a corresponding process of elimination. We cannot impose to the next generations our way to conceive the cultural heritage, we have to negotiate it with the today high school and university students. The education process will decide the result of this negotiation”.

Stating that he learned from the International Semiotics Conference in IU, he gave examples of topics which impressed him such as Sequences of life at Serail, Cultural heritage based on Istanbul, Bell stone from Russian Karelia, Iconography of the Old Testament Prophets, War as cultural heritage and many more.

To this positive appreciation he added as a problem of the future the need to pay more attention to the global, holistic, integrative aspects, including our critical, selective attitude about the accepted-rejected alternative, and to be open to the capacity to see in the new technology not only its instrumental aspect, but also its human and cultural face, motivating to include it in the basic cultural heritage of today human society. Prof. Marcus recorded:

“Warm thanks to Eero Tarasti, Sevinc Gulsecen, Deniz Ozden, Zeynep Onur and to the members of their teams for their help and hospitality.”