Academicians and speakers from all around the world have attended to the symposium that is done in IU Rectorial Building Doctorate and Blue Hall in 6 sessions total. Academics made their presentations about headlines like new media, social media’s effect on children, hate speech in social media, virtual reality, using web pages, using social media as a way of expressing oneself, visual communication desing and much more.

IU Vice Rector and  Manager of IU Press and Public Relations, Prof. Dr. Ergün Yolcu has made the opening speech. Prof. Dr. Yolcu, has shared that with this symposium is going to approach what are the opportunities that media has and what are the problems of out time. Stating, we will be listening to 30 notices from 45 different academicians. Prof. Dr. Yolcu underlined that the organization is being carried out with the cooperation of TRT and said: “Our cooperation with TRT does not stay here. With today’s programme we are also giving the 9th International TRT Documentary Awards a start as well.” Prof. Dr. Yolcu stated: “I wish to  create new projects all together and carry out a symposium that would inspire” and concluded his words by thanking the attendees. 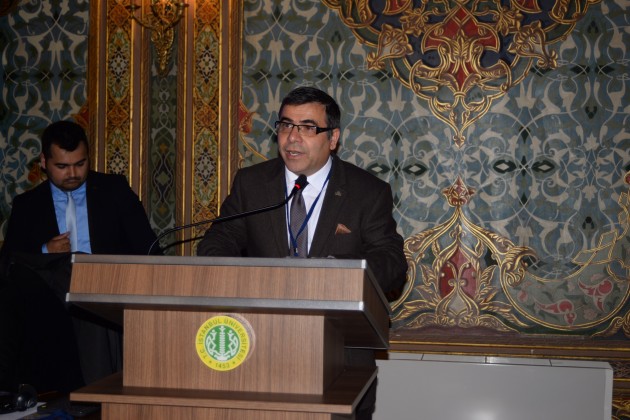 Getting the floor after Prof. Dr. Yolcu TRT Secretary General Bünyamin Korkmaz, started his words by thanking to Istanbul University which supported this year’s 9th TRT Documentary Awards. “As TRT we value cooperating with universities and aim to carry our activities to different fields with universities” said Korkmaz and stated that they wish to expand the field of cooperation between Istanbul University and TRT. Saying that we are in a age that everything solid vaporizes, Korkmaz adds “As the institution we are in need of understanding the change at every point of the product range and we are in need of expanding the offered opportunities to wider fields” and added that they are the institution that wishes to pursue this mission most. 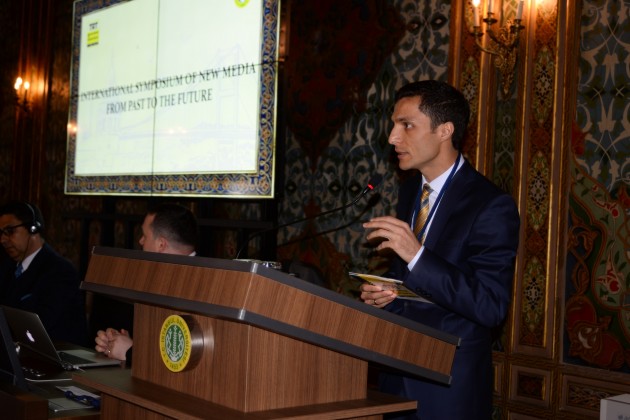 Giving his speech after Kormaz, IU Rector Prof. Dr. Mahmut Ak said, “International From Past to the Future New Media Symposium” is a meeting that brings people who are milestones in their field.” Prof. Dr. Ak stated that they are content to actualize this meeting with TRT. Highlighting the fact they we are at a time that fields and the type of communication is changing, Prof. Dr. Ak said “At this time when Internet is getting empowered, the different forms and designs of communication is on the table.” Stating that IU is among the institutions that uses  new media most actively Prof Dr. Ak also said “As IU we are not just using the devices of new media but we are creating them. We are proud to be in world’s bet 500 universities list as an institution of which slogan is ‘ Science Bridge Connecting Past and Future’.” Prof. Dr. Ak ended his words by thanking all of the researchers, TRT representatives,students and attendees. Being one of the key note speakers of the Dr. Jon-Hans Coetzer, started his words by talking about digital age. Saying “Thousands of people is creating content in a short time,” Dr. Coetzer said that these contents may be feeding from any kind of source. “What makes internet dangerous is hate speech and digital contents counts as well” said Dr. Coetzer and added that the power that institutions had is going to be passed to people. After Chief Academic Officer (CAO), Glion Institute of Higher Education Dr. Jon-Hans Coetzer’s speech, documentary filmmaker and the inventor of Korsakow Florian Thalhofer has given his presentation on “Future of Documentaries.” Thalhofer said “Media does not only change how would you express things but it also changes the way you think.”Talking about what is reality Thalhofer said “Reality is maybe like a ray inside the Sun.”Thalhofer added to his words that in the future the aim of the documentary movies won’t be defining but examining the reality and catching the most important point of views. 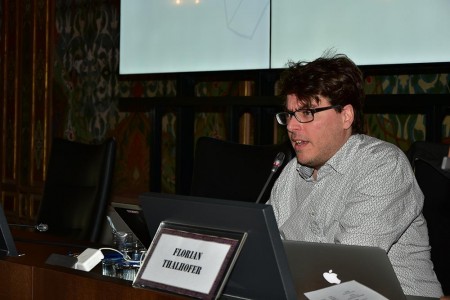 After the opening speeches first session of “International From Past to the Future Symposium”s first session has started. The sessions that are done under the headline of “New Media” were carried out in IU Rectorial Building Doctrate Hall and Blue Hall at the same time. In the Doctrate Hall the session that is moderated by Prof. Dr. Aytekin İşman, Res. Asst. Serkan Bulut and Res. Asst. Ahmet Faruk Çeçen made their presentation on examining the TV series Black Mirror with a movie team that they formed. Res. Asst. Bulut and Res. Asst. Çeçen, have made explanations about the topics that are involved in the series such as, what kind of experiences computers brings to the people, social lynch, environmental problems and as such.

Later on the session, Asst. Prof. Ali Murat Kırık has discussed about online newsmaking under the perspective of economic relations and media connections.  After Asst. Prof Kırık, Lecturer Burcu Bektaş has done her presentation about e-sports and virtual reality. Boğaçhan Aydın, who was handling the topic of E-sports new media has explained the behavior of an e-sports team’s attitude in new media. 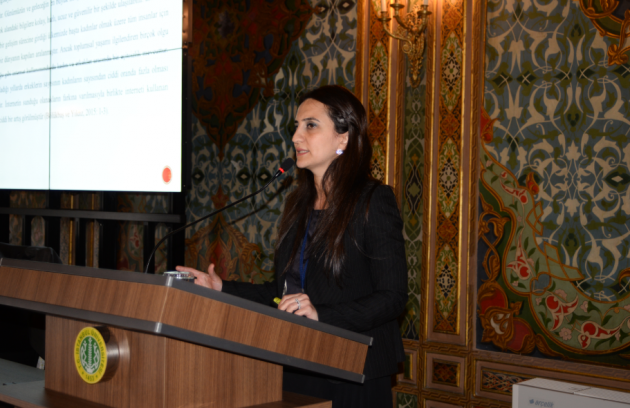 Academic Esma Sancar made the last presentation of the first session that took place in Doctorate Hall. Academic Sancar, explained the purposes of women’s internet using over Istanbul example. First session in Blue Hall which took place simultaneously with the one in Doctorate Hall presided by Prof. Dr. Suat Gezgin. Prof Dr. Gezgin stated: “While we used to watch one tv channel now we are speaking about the new media and its future. Prof. Dr. Yolcu who began to speak after Prof. Dr. Gezgin mentioning that the universities have a great impotance in terms of bringing together the youth and the new media, said “we are responsible of IU’s corporate identity and we are carrying out studies in the name of this identity.”  Prof. Dr. Filiz Aydoğan Boschele who made statements on how children use the technology in their free time, said that  traditional free media activities have been decreased  with the new media. Asst. Prof. Dr. Onur Akyol began to speak afterwards. Introducing Hologram technology Akyol said that this tech presents to the audience a more realistic watching experience. After Asst. Prof. Dr. Akyol’s presentation, Asst. Prof. Dr. Süleyman Türkoğlu evaluated the technology’s usage as visual design and its representment  within the context of mobile communication example. Presentations in the first session that took place in Blue Hall, concluded after Research Associate Ömer Faruk Özcan’s Marmara Media Example presentation. 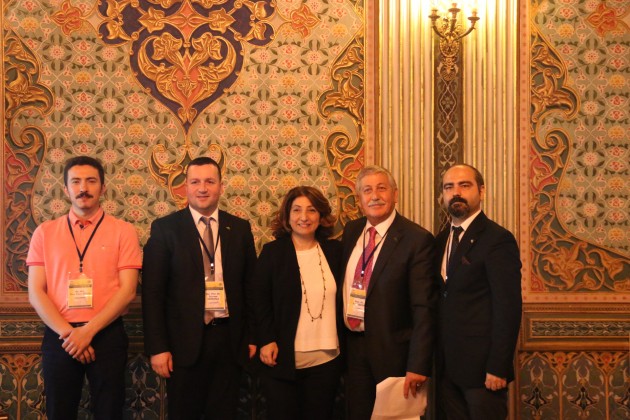 As part of the “International New Media Symposium From Past To The Future,” IU Rector Prof. Dr. Mahmut Ak and TRT General Secretary Bünyamin Korkmaz made statements on symposium  through the live bradcast on TRT News. Through the other live broadcast on TRT Avaz, IU Faculty of Communication Associate Dean and  Assistant to Rector Prof. Dr. Ergün Yolcu, TRT General Secretary Bünyamin Korkmaz and IU Faculty Of Communication Assistant Professor Özlem Arda became the guests of a programme named “Detay 13”. 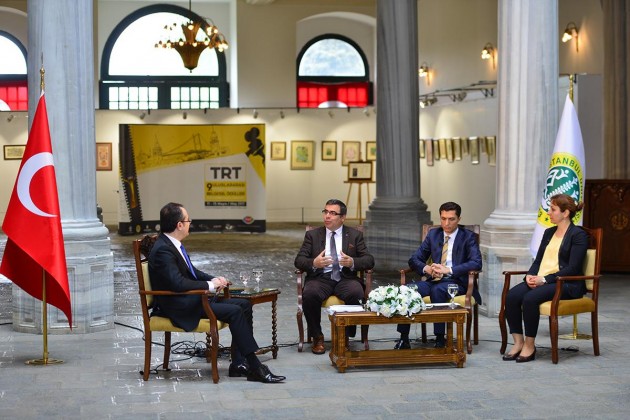 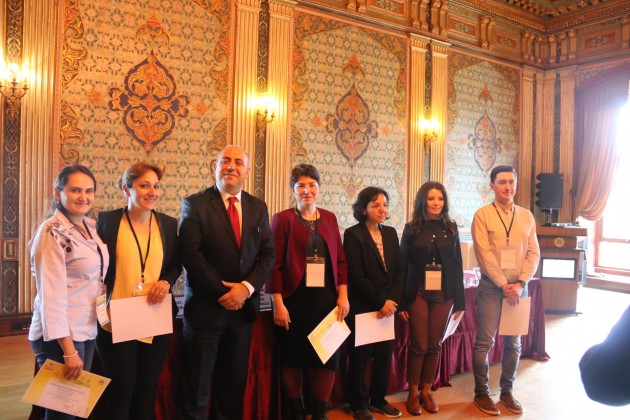 The Opening speech of the symposium’s third session, made by prof. Dr. Lev Manovich  through live communication from USA. Prof. Dr. Manovich who made a presentation named “How To See One Billion images” made explanations on digital culture and digital media art. After Prof. Dr. Manovich, Prof. Dr. Cristoph Schmitd evaluated  the innovation in communication and new developments on media sector. 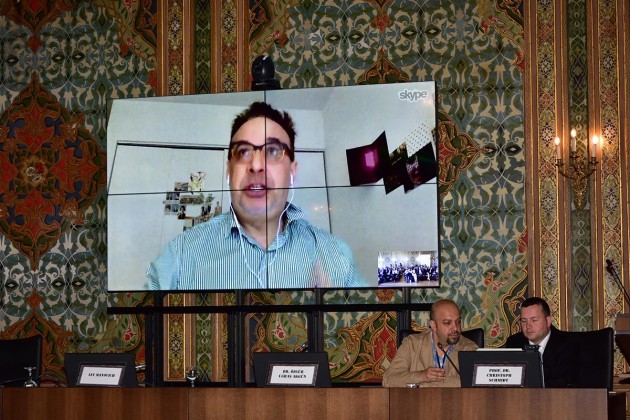 In the third session under the title of “Social Media” that took place simultaneously in Doctorate Hall and Blue Hall, Prof. Dr. Filiz Boschele moderated the presentations. Doc. Dr. Betül Onay Doğan, explained the content production process in the  non-governmental organizations’ media usage in first presentation. Afterwards, Asst. Prof. Dr. Burcu Kaya Erdem approached the Streisand Effect and the effect of institutions that are not aware of new media culture on the people who act with the old media understanding. After Feyza Ünlü Dalayı and Ezgi Uslu who spoke upon social media and public space, Research Assistant Gizem Parlayandemir and Research Assistant Damla Akar explained the social media’s effect through documentaries and documentary channels.  The last presentation of the third session in Doctorate hall made by Doc. Dr. Hatun Boztepe Taşkıran who evaluated the online relationship management applications in public relations. 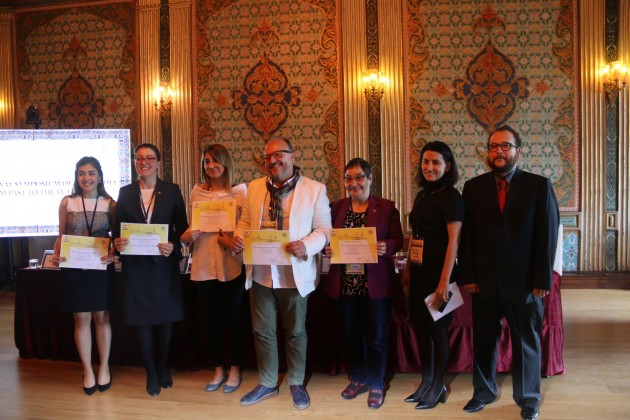 Last Session of New Media Symposium titled “Social Media” moderated by Prof. Dr. Murat Özgen. Assistant Professor Sertaç Timur Demir evaluated the social media culture within the context of terrorism. After the presentation titled “Social Media Effects in Social Responsibility Campaing #TurkishAirlinesHelpSomalia ” made by Assistant Prof. Dr. Ümit Sarı, Assistant Prof. Dr. Veysel Çakmak revealed the Instagram being used as a tool of self representment and its effect on students. The session concluded with the last presentation on fashion industry and social media made by Dr. Evrim Kabukçu.

At the ends of the sessions sertificates presented to the participants by moderators. After a workshop named “Virtual Reality Technology and Applications” arranged by Prof. Dr. Erdoğan Köse “International New Media Symposium From Past To The Future” had concluded.