Assistant Professor Şentürk said “My book is a fruit of our research project. We surveyed on the subjects which conditions the old people are in and we evaluated their satisfaction of life. Besides, we researched what kind of facilities they benefit from in metropolis-İstanbul. The thing that triggers me to publish this book is the defiencies of these kind of research projects in the field of sociology. This project is supported by “İstanbul Development Agency”. We love doing these kinds of projects with our students. We, as the academicians and the students benefit from it academically. This project is held thanks to our master and PhD students; Reyhan Beyza Altan, Büşra Turan, Hamza Kurtkapan and Merve Ayar. On the other hand, with the collobrations of other universities academicians; -Marmara University Dr. Mustafa Otrar, İstanbul Şehircilik University Ass. Prof. Fatih Aysan, Galatasaray University Ass. Prof. Didem Danış ve Yalova University Ass. Prof. Harun Ceylan- our project and book started with the basis of their research knowledge. I was the project director. It got ready about three months and later on it was published. The book is like a guidance for the people who wants to learn the deficiencies and needs of old people.”

Assistant Professor Şentürk indicated that the action of old people within the border of city is very problematic. One of which problem is transportation safety. While the other one is the cost of life. If they live on only by a retirement salary, it will be hard for them to keep up with the life in metropolis. By showing these problems, which he detailed in his book, he created an awareness in society. He emphasized that we don’t give enough value to old people. In order to give them value and satisfy their wishess, local authorities should solve their problems and make their lives much easier.

“Socioeconomic level and gender difference is a striking fact on the condition of death of one side in marriages. Men have difficulty in living by themselves. In Turkey, they have less house responsibilities compared to women. They can’t stand on their feet alone. If a man has a satisfactory socioeconomic level, he could buy some facilities like hiring a cleaner. On the other hand, women stand on their feet and they don’t marry stemming form our researches. They prefer living closer to their children but in their own flat and they look after their grandchildren” he stated. 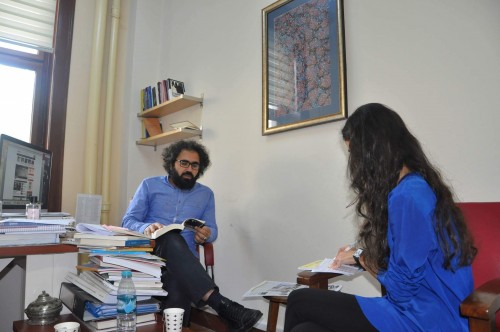 Assistant Professor Şentürk explained this condition by saying “We didn’t survey specifically about this fear. However, instead of the fear of death they have the fear of depending on somone else during their lifetime.”

“Where Seniors Should Be Looked After?”

He concluded that this topic of research is a new beginning within the other researches and he highlighted that they need to have more data on this research topic.