The group gathered at Galatasaray Square in Beyoğlu, unfurl a banner which was written “We are Charlie” in both French and Turkish.

Intellectuals bearing in their hands comic, pencil and flowers, walked through in front of the French Consulate. Journalist Gülşah Karadağ who is reading the press statement, expressed that they reprobate this attack without “but, however, yet” and share their their sorrow. 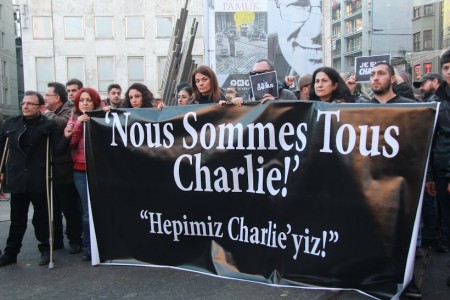 “Pencil Is Sharper Than Sword, Stronger Than Weapon…”

Saying “We are neither afraid of this attacks’ perpetrators nor the visible or invisible forces behind it” Karadağ told that they will not concede from expression, press and the freedom of humour. Karadağ continued her speech:

“We were exposed to attacks of state, deep state and dark forces from Ahmet Samim, Abdi İpekçi and to Uğur Mumcu; from Metin Göktepe, Hafız Akdemir and to Hrant Dink. This is a country that Markopaşa was closed, Tan newspaper was looted, Özgür Ülke newspaper was bombed, journalists, writers, drawers were burned in Sivas. Therefore, we understand that this attacak against Charlie Hebdo was indeed a ‘crime against humanity’ best. We remind to those who ensanguined Charlie Hebdo one more time; pencil is sharper than sword, stronger than weapon.”

After the press statement, cloves, pencils and photos of decedent artists were putted in front of the French Consulate and candles were lighted. People standed in homage for a minute in commemoration of decedents a moment of silence. HDP Mersin deputy Ertuğrul Kürkçü, fashion designer Barbaros Şansal, journalists Ahmet Şık, Mehveş Evin, Hilmi Hacaloğlu and Zafer Arapkirli and also Student Collectives and United June Movement members participated to march. 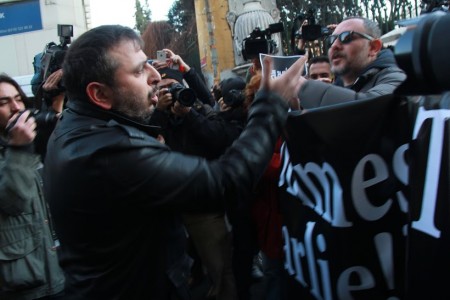 Physical and Verbal Assault to Intellectuals

Some people lashed out to march which was held to support Charlie Hebdo which was exposed to a terrorist attack. 2 people in front of the Galatasaray Highscool, assaulted verbally to marchin to group by saying “You can’t insult out prophet.” Verbal attack turned into a affray in a short span of time. Being taken into custody 2 people who attacked to marching peope were boarded the police bus. It was seen that assailant boarded the bus made a İBDA-C symbol.